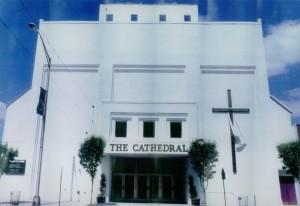 PERTH AMBOY, N.J. – Today, the church is Cathedral International, but 109 years ago in its inception, it was named Second Baptist Church. It all began in 1892 when 35 African Americans started church services in the basement of the predominately white congregation at First Baptist Church in Perth Amboy. The founding group was forced to establish a separate church in a different location. The move to a different location was a ‘fresh start,’ and it was symbolic of a church that would continue to move in its effectiveness, connectedness and relevancy to its community and parishioners.

“The 109 year church anniversary celebration is an opportunity to thank God for the past, present and future,” stated Mrs. Millie Mitchell, an 89 year old member who recalls being baptized at the church in 1944.

“Serving the needs of the congregation and the community was the focus of this great church in its inception,” said Bishop Hilliard. “109 years later, with needs and challenges being much greater, we forge forward with the help of Almighty God to continue that same focus of serving people.” Bishop Hilliard is also celebrating a milestone anniversary. He has served at the helm for 30 years as Senior Pastor. The 30th Year Anniversary Gala will take place Friday, November 8, 2013 at the Hilton East Brunswick.

Over its 109 year history, 13 pastors have navigated the course of this progressive body of Christian believers. In 1901, members moved to their first mission at 315 Front Street; 1904, they purchased a building on Gordon Street and officially dedicated it as the Second Baptist Church which marked the beginning of the 109 year existence; 1957, they purchased a red-brick church at 101 Broad St; 1990, the former Majestic Theater was purchased, renovated and in 1992, services began (277 Madison Avenue) where Cathedral International is located today.

When Bishop Donald Hilliard, Jr. became the pastor, October 1983, the church had a membership of 125. Under his visionary leadership, unprecedented growth occurred and today it is a 5,000-member, multigenerational, multicultural church serving the communities of Perth Amboy, Asbury Park and Plainfield. American Baptist Churches, USA, a mainline Baptist Christian denomination, designated Cathedral International as

a model for church growth.

A detailed review of the church history, its mission and ministries are available at www.cathedralinternational.org. Information is also available by calling the church at (732) 826-5293.